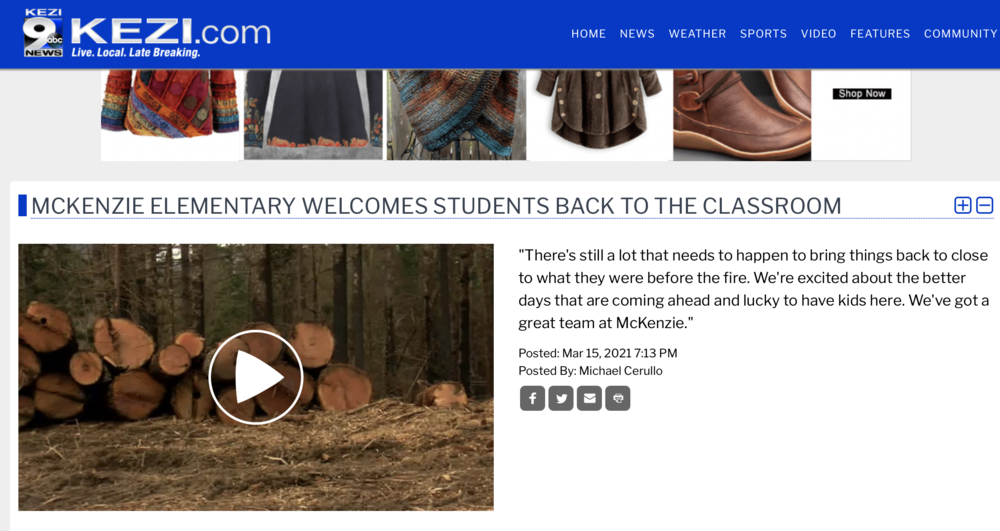 MCKENZIE ELEMENTARY WELCOMES STUDENTS BACK TO THE CLASSROOM

The community is currently working to rebuild after the tragic wildfires, and some students in the McKenzie district have been attending classes on campus since November in order to access the internet.

"That's been probably the biggest challenge, the internet and just getting it to work," educational assistant Jodi Erdahl said. "So far everything's been good the last probably three weeks."

For the first time since last March, McKenzie Elementary School welcomed back students in first, second, and third grades on Monday. In total, about 60 students participated in on-site learning, according to superintendent Lane Tompkins.

"We're just excited to be able to support our kids and bring them in because we know there's a lot of good protective elements having them in school," Tompkins said. "They missed out on a lot of good milestones."

"They've all done a wonderful job and they're all very excited to return to school and be back in their classrooms," Erdahl said.

The school community has also overcame numerous other challenges. Crews removed about 800 hazard trees from the campus to ensure students and staff were returning to a safe place.

"There are a lot of chainsaws and helicopters," Tompkins said. "A lot of other activity going on."

The school district plans to welcome back students in kindergarten, fourth, fifth, and sixth grades after spring break on March 29, according to district officials.

"There's still a lot that needs to happen to bring things back to close to what they were before the fire," Tompkins said. "We're excited about the better days that are coming ahead and lucky to have kids here. We've got a great team at McKenzie."