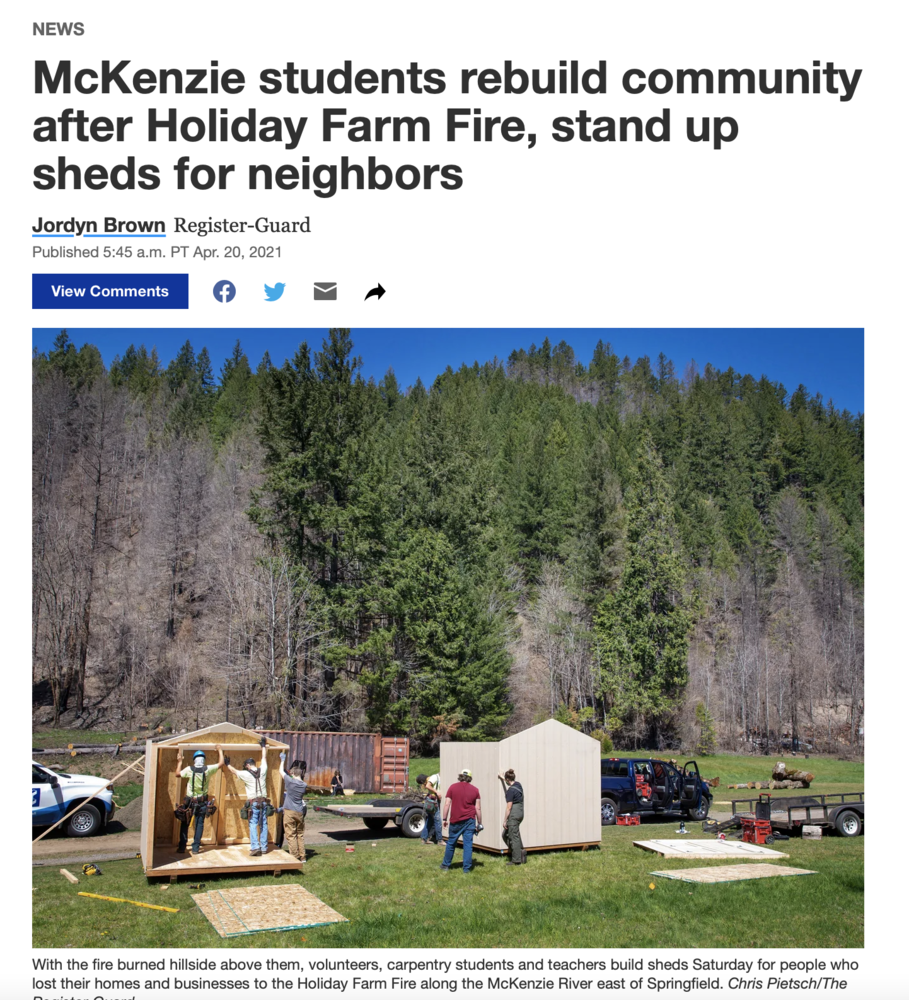 After the Holiday Farm Fire burned more than 400 homes in the McKenzie Valley in September, there was little left behind to salvage for many people.

McKenzie High School students and community volunteers, wanting to help aid the area's recovery and rebuild, worked together this past weekend to build sheds for their neighbors who lost their homes and businesses during the wildfires.

"The first thing a person needs after their land is clear is a shed to start rebuilding," said Lee Kounovsky, who works with the Lane Education Service District, 4J schools and Lane Community College teaching technical education, like construction.

This local project stemmed from Sheds of Hope, a group that started in response to Hurricane Katrina in 2005, Kounovsky said. The local organization, One Hope, has helped provide the construction plans and connect with community members in need.

The goal is to have the 10 McKenzie High students and local partners build 10 to 15 sheds by the end of the month, spending each weekend in April constructing them. Students also are receiving school credits in math and applied arts and a small stipend from disaster relief funds.

In between cutting two-by-fours with a power saw on Saturday, ninth-grade student Levi Lockwood said the school credit was helpful for him to get some math done earlier in his high school career, and it felt good for him to help out.

"This is a learning opportunity for the students first and foremost, so we get done when we get done," Kounovsky said. "This also teaches kids how to give back, how to donate and how to volunteer, and those types of things are my goals."

The outreach even extended to former students.

"I felt bad because my friend's aunt just lost her house and I know a lot of other people who lost their homes," said Edwin Powell. Powell graduated from McKenzie High School two years ago but still came back to help rebuild.

"I got the opportunity to help, so I took it."

Along with the school, other organizations involved include Lane ESD, Lane Workforce Partnership, Northwest Youth Corps, and a long list of local construction companies that have donated supplies and labor.

One of the companies helping out last weekend was Kaminski Construction, a Eugene-based contractor started by Jason Kaminski during the financial crisis of 2008. It was an easy decision for them to help, said spokesperson Melissa Prestinario.

"As a community, we were all just devastated for these people. I mean, the magnitude of what these families have lost is pretty incomprehensible," she said. "I think it's a natural fit for a construction company because, you know, maybe a lot of us feel (for them), but what can we do? And we don't have the skills. But a construction company does have the skills to do that."

From a perspective of growing job opportunities for students, the project also helps students get those skills, and connect with companies that apprentice students and help them get into trades.

"I think it's a really a missed opportunity, not develop the trades in our young people and our students, so that's something that we're definitely passionate about," Prestinario said.

The first weekend of April was largely dedicated to getting the project set up. Work continued last weekend when they were able to build the pieces and stand up sheds. Janicé and Art Myers received two sheds from the high school that day.

The Myers had two businesses along the McKenzie Highway before the fire, Janicé Myers said. The couple were leaning on those businesses to fund their next endeavor: a brewpub looking out at the river.

Your stories live here.
Fuel your hometown passion and plug into the stories that define it.
Create Account

They planned to move to the area but luckily hadn't yet when the fire struck, she said.  Now, the two are trying to find a way to move forward with their brewpub plans six years ahead of schedule at the request of neighbors, in hopes it will bring jobs back to the area, she said.

They waited to request the sheds until others who lived in the area had a chance to first, and on Saturday, they received two on their property.

They're also building their residence on the land behind where the brewpub will be, so having one less thing to worry about, like where to store their materials, is incredibly helpful for them, Janicé Myers said.

"We do all our own work," she said. "We have a lot invested in this land … . It's a blessing to see people come up and (do this), not realizing that something as small as a shed makes such a difference to people who basically have to start over."

This is the largest project schools in the area have undertaken, Kounovsky said. Students he's worked with have built sheds before, but nothing at this size, and usually just one at a time upon request.

He wants to see this continue though and get other schools involved so they can be ahead of disasters instead of reacting to them after.

"My hope is that these sheds are built and stored, because they come in panels ... and whenever there's a disaster in our area, these sheds are ready to go down the highway," Kounovsky said.

"I mean, what a perfect project for students to do. We can do these in our own schools and then we put them on a truck and they take them off to wherever they're going to be set up from the coast to the mountains, anywhere along I-5, maybe even another state."