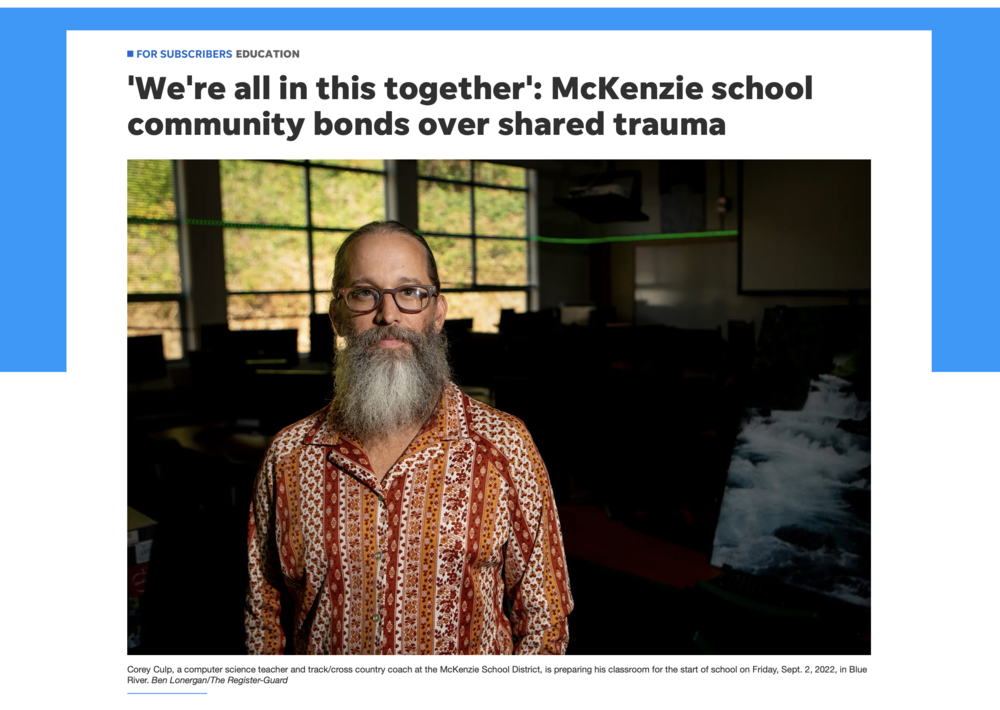 Two years ago, the Holiday Farm Fire devastated McKenzie Valley communities days before the intended start of the 2020-21 school year.

For local schools like the McKenzie School District in Blue River, the journey to recover has been long and challenging. Bonding over shared trauma has been instrumental in the district's growth.

"Everything was just so chaotic," said Corey Culp, computer science teacher at McKenzie Middle High School. "Everyone was just scrambling and trying to figure out how to move forward. I'll never forget, we were supposed to be doing distance learning. I was teaching out of my best friend's garage. That first kid that shows up on the screen, I think that was a point of 'OK, now we can start moving forward a little bit.'"

The 2020 school year was postponed by about three weeks while the district tried to recover its supplies and coordinate with families to ensure they could find a way to get online.

Culp, instrumental in getting the school online for that first day, provided Chromebooks for students so they could attend virtual classes. Once classes began, he said communication was the key to getting to the bottom of students' needs.

"When you go through something like that, you just can't help but grow a little bit closer," Culp said. "We were already a tight-knit community, but it just, I think it broke things down beyond a teacher-student relationship. We're all humans, we're all in this together and (we) just really care about each other on like, a different level."

The fires burned through the McKenzie Valley on Sept. 7, 2020, but the memory is still fresh for many.

In a tour of the school district campus that serves as the home for K-12 students, McKenzie River Superintendent Lane Tompkins pointed out the areas that had been burned. He said the fire department defended the schools furiously, temporarily getting surrounded by fires.

There was damage to some buildings including the storage building, concessions building and the stadium, but the central buildings were all saved.

During the Holiday Farm Fire, more than 400 homes were lost. Temporary housing situations exist and houses are being built all the time, but many families still do not have secure housing situations. Many others have been displaced to neighboring towns, including Eugene and Springfield, and have not yet had the opportunity to return.

Adjusting to 'reading the room'

McKenzie School District had about 225 students before the fire. Tompkins said that at their lowest, they had about 165, but they'll be starting out this school year with 175.

He didn't have an estimate for how many students still have uncertain housing situations, but it is still a significant portion. Because of varying factors, supply shortages, insurance challenges, affordability, and more, there is still a lack of housing available in Blue River and surrounding communities.

"We're still in that position supporting students, they might be in trailers waiting for their homes to be rebuilt or living with family members," Tompkins said. "Even staff members, they're in different phases to find any sort of groups or housing or they're living in a trailer, waiting for their rebuilds to kick off. There's still a lot of people in different phases of recovery, and a lot of kids and families are in recovery."

Identifying where students are living has been a learning process, Culp said. Making sure teachers know the challenges student face is important, he said, and to never assume a student's home situation.

Culp has become more cautious of how he approaches students and how he says things and encourages his students to do the same.

"I always thought I was very understanding, wise and stuff, but this is on a whole other level," Culp said about recovering from the fire. "Just remembering, they're kids, they're humans, and … there's all this stuff going on at home as well."

Culp recalled one student who was still living in a hotel with his family last year. The student was always bubbly and talkative in class, he said, but he saw a different side when he approached the student in the parking lot outside of school.

"I just wanted to go say hi to them; they hadn't been in school a couple of weeks," Culp said. "When I walked up to that window, I thought I was gonna get that like, 'Hey, oh, my gosh,' but it was like, 'Dude, get out of here, just leave me alone.' "

The exchange helped Culp realize that with students going through so many changes and challenges, as the adult, he had to read the room and recognize when students need to talk and when they need space. Some students feel shame about their living situations, whether it be at a hotel or in a trailer.

"That taught me a good lesson," Culp said. "I don't think it damaged any relationships. I mean, I know deep down, they still appreciate it. That was not the time and place probably to go out there and say hi."

The district has also had some wins over the past two years, notably building strong bonds with the neighboring school districts including Phoenix-Talent School District and Santiam Canyon School District.

It's easy to think you're just experiencing this on your own, Tompkins said. "That's the biggest value, having been able to connect with those districts. They're all dealing with the same stuff."

Keeping momentum in the new year

Neil Barret, assistant principal of McKenzie Middle High School and football coach, was working in Portland at the time of the fires. Having worked for the district previously, he decided to move back to Blue River and take over as assistant principal to help aid in the recovery and reconnection efforts.

Since he returned, he has helped organize parent nights and other ways to bring staff and parents together. However, those relationships have changed drastically.

"There was more community hubs where you might run into people, like there's the store on Blue River that burned," Barrett said. "That was a place where you'd go on your break, you go get a snack, and you'd see the parents or the store owners. Just those little opportunities just to run into people and spend two minutes catching up. You lost those random interactions."

Since the fires, community outreach has had to be more conscientious. The COVID-19 pandemic added another layer of distance and challenges with interaction.

Barrett said this school year, he hopes it will be a whole new starting point for recovery.

The district has been working to replace the materials for the lost buildings with fire-resistant materials. This summer the district was able to upgrade the "old gym" to be seismically stable, thanks to a $2.3 million Seismic Rehabilitation Grant Program through Business Oregon.

As the football coach, those sporting events have been a big point of reconnection for the community. Barrett is looking forward to the rebuild of the grandstands. It's scheduled to be completed this fall, and the district is still looking for sources to help fund the project.

"We're hoping that on our homecoming and senior night, we'll have brand new grandstands," Barret said. "We're hoping that a whole bunch of people will want to come back. I'm hoping that will be a catalyst for people to feel like 'Hey, we've got everything back to normal.'

"That's going to be a point where we can really look forward to spring off of that."

Aid is still needed at McKenzie River School District and other parts of the McKenzie Valley. To find out ways to help, visit https://www.mckenzievalleyltrg.org or email Info@McKenzieValleyLTRG.org.